The Story of Drake Statue 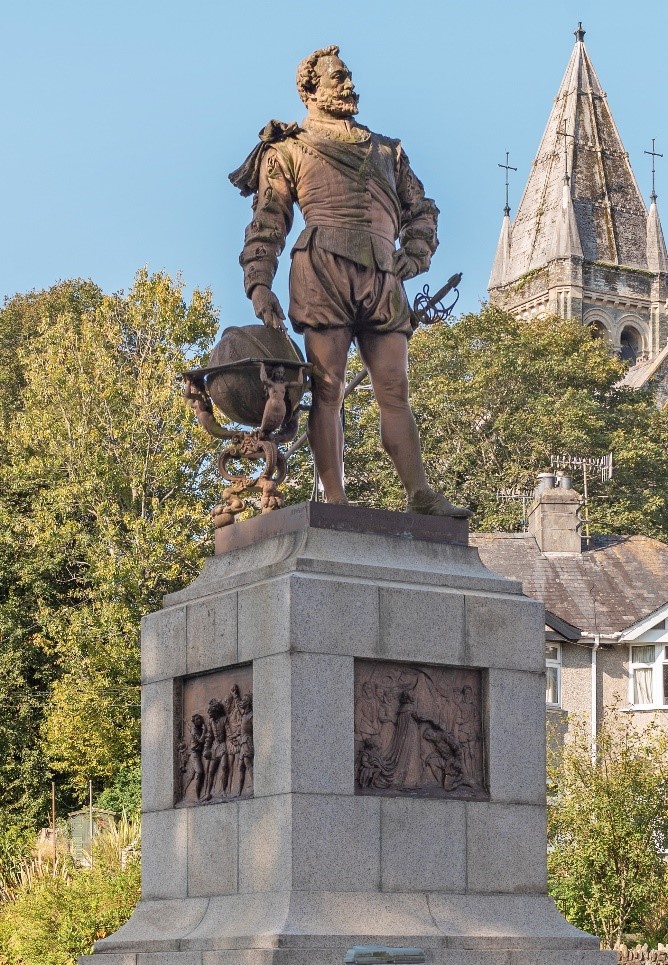 In 1882 a civic delegation from the Mayor of Plymouth arrived in Tavistock to raise funds to erect a statue to Sir Francis Drake on Plymouth Hoe in readiness for the 300th Anniversary of the defeat of the Spanish Armada in 1588.

Incensed at the idea that the Plymothians were attempting to steal Tavistock’s famous son, the worthies of Tavistock led by Rev Edward Spencer, headmaster of the Grammar School, agreed to start a fund to raise money for a bronze statue of Drake.
Before they could launch their appeal, Hastings Russell, the Ninth Duke of Bedford, offered to pay for the statue as a gift to the town.
The Duke commissioned the Austrian born sculptor, Joseph Edgar Boehm (1834 -1890), who was a member of the Royal Academy and sculptor-in-ordinary to Queen Victoria.
Various sites for the statue in Tavistock were considered, including Bedford Square, the Meadows and Fitzford. Boehm thought that Fitzford would showcase his work to best advantage where it would be within view of Crowndale where Drake was born.
The 10ft high statue, which had been cast in Surrey, came by train to Tavistock on Friday 21st September 1883 and remained at Tavistock South station overnight. At 6.00 am the following morning, it was taken the half mile to Fitzford.  The two tons of metal were hoisted into position and a sheet was thrown over the statue to await the official opening fixed for the following Thursday, September 27th.
After a prayer and speeches, the statue was unveiled, followed by a lunch for the dignitaries at the Town Hall.  The whole town enjoyed music and dancing in the Pannier Market Hall, and an athletics event in a field behind the Fitzford Cottages.
Five months after the statue was unveiled in Tavistock, a copy was erected on Plymouth Hoe in early 1884 without the bas reliefs.
In 1885, railings were added around the pedestal after vandals broke Drake's sword and drunken railway navvies had taken to sleeping off their heavy drinking bouts on the steps below.
In 1999, the original plaster model for the statue was found hidden in woods on Haldon Hill, near Exeter. It was transported to Buckland Abbey where it was repaired and is now on permanent display.
The Panels Around the Statue
On three sides of the Tavistock statue's plinth are bronze bas reliefs depicting key moments in Drake's career. 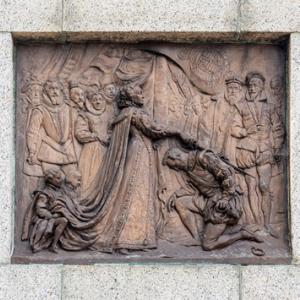 4th April 1581 - Drake is knighted at Deptford
Five months after his voyage around the world the
Golden Hind was brought to Deptford where the
Queen Elizabeth I met him.The Queen stood on the
deck of the Golden Hind and, having handed her state
sword to the French Ambassador to actually perform the
ceremony, bestowed the accolade of the knighthood on
Francis Drake. 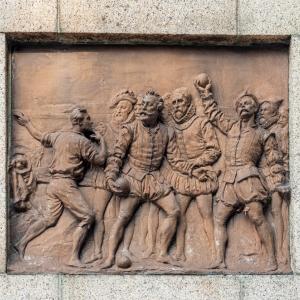 19th July 1588 - Drake finishes His Game of Bowls
An unproven story tells that when Drake was told of the
approach of the Spanish Armada, he insisted that he had
time to finish his game and then finish the Spanish fleet. 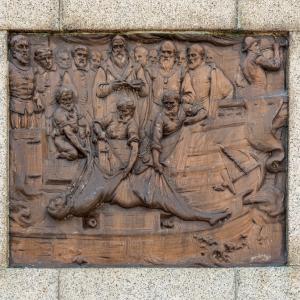 29th January 1596 - Drake’s Burial at Sea
Drake died of dysentery off Panama.
His body, dressed in full armour and sealed in a lead coffin
was buried at sea about three miles off shore
from the port of Portobelo.
The plaque fails to show the coffin.

The content of an Interpretation Board which was agreed to be erected by the Town Council in 2020/21 setting out key aspects of Drake’s life and achievements can be viewed here:

“Frequently Asked Questions” about the Interpretation Board for Drake’s Statue can be viewed here:

Bibliography of historic sources in preparation of the Interpretation Panel