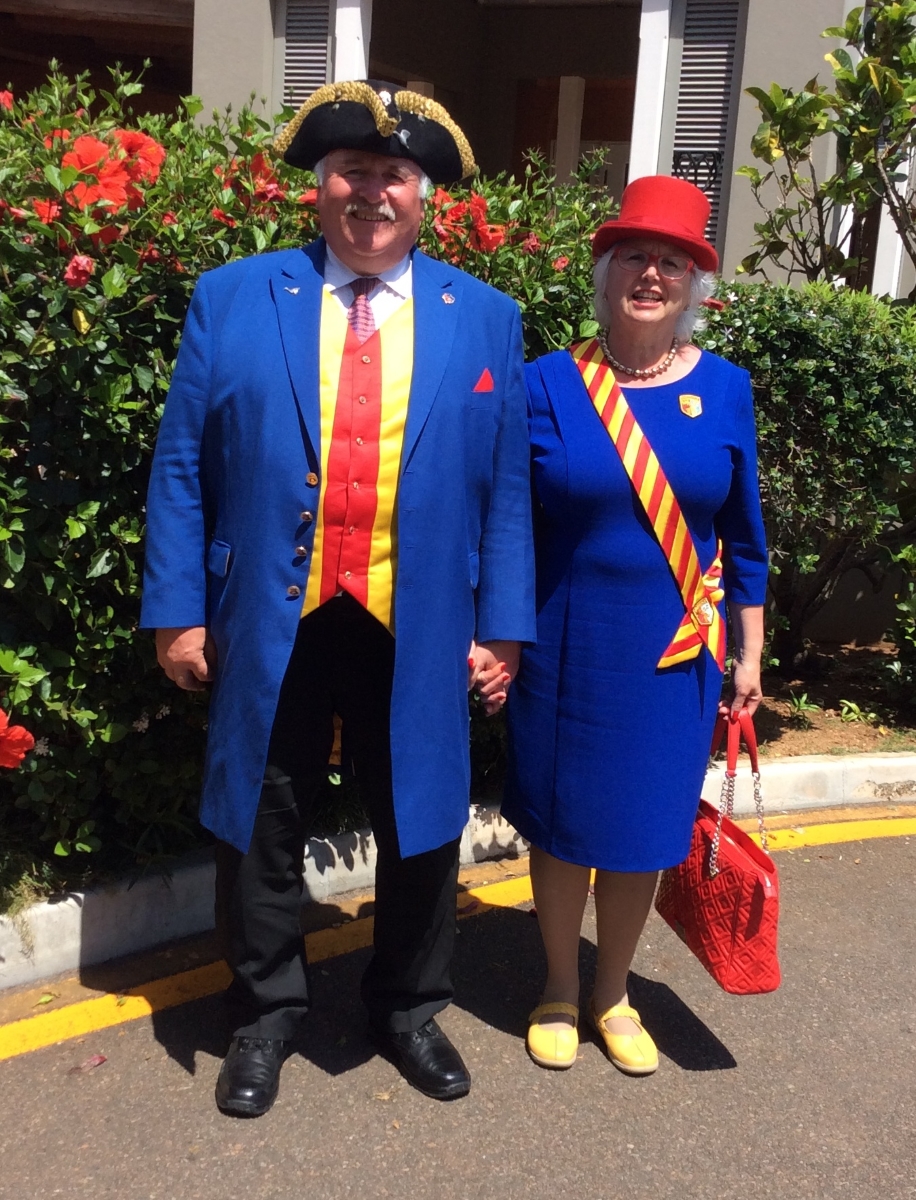 The Town Crier of Tavistock is Mr David Turner.

David was the winner of a competition held as part of the Tavistock Carnival and in conjunction with the Lions Club of Tavistock to find a new town crier. He enjoys representing the Town in this important Civic role. Since his appointment, six years ago, he has taken part in many engagements in the town, including Goose Fair and Dickensian Evening every year.

At the Town Council meeting of Tuesday 15th February 2011, the Town Crier and his Consort, his wife Rosemary, unveiled their new uniforms, featuring the colours of the Town Crest and with the consort's hat featuring a band of geese for the annual Goose Fair, an historic event for which Tavistock is famous.

In July 2012, David was successful in the Kingsbridge and Dartmouth Town Criers' Competition, winning the first round with his Home Cry and Modern Olympics, and coming second in the Peter Randall Memorial Trophy with his cry on Thomas Newcomen. Overall he achieved second place in the Sir Francis Drake Armada Cup (the whole two-day event) - congratulations to David on this achievement!

For requesting his services for an event, David can be contacted directly by post to:

History of the Town Crier

The office of Town Crier has evolved from that of Night Watchman; there are various references to Watchman in the Bible: Isaiah chapter 21, verse 11 and Jeremiah chapter 6, verse 17 for example.

A civic post, now extinct, was that of Mayor's Wait. The post of "Waiting' or "Watching" at the town's gate and walls, calling the hours of their watch, the time of curfew and occasions of opening and closing the gates. They did this by blowing into an instrument known as a Burgmoye Horn. Sometimes a single note sufficed, but many "Waits" were able to play simple tunes. Derived from this office was that of the Bellman or latter-day Town Crier. The original duty of the Bellman was to patrol the interior of the town at night using a bell to announce his calling the hours and as a supplement to his voice, should he need to raise the alarm. This ability to attract attention to himself led to his eventual emergence in the daytime to make pronouncements, announce the opening of markets etc., meeting of the Council, and Mayoral and Royal proclamations.

One of the duties of the Watchman was make sure that fires in bake-houses and private dwellings were damped down for the night after the curfew bell had been rung. To damp down the fire and ensure the embers did not re-ignite, a metal cover known as a "couvre-feu" was placed over it and it is from these Norman-French works that the English term "Curfew" is derived. The Watchman on duty in Pudding Lane could not have been very vigilant on the night of July 25th 1666, hence the Great Fire of London.
In some cases Night Watchmen also acted as firemen. As time progressed, firemen were appointed in their own right. When the Watchman had raised the alarm and the firemen had arrived he would precede them, ringing his bell and clearing a path and warning citizens of their approach. As years passed the firemen would have hand-drawn fire appliances. It was at this time the Watchman relinquished his duties in front of the fire engine, and a bell was mounted on the vehicle itself. 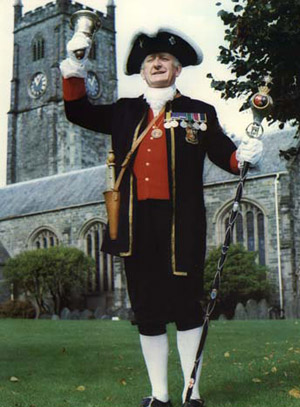 Tavistock has had a number of Town Criers. The earliest we have been able to trace was around 1836. There may have been earlier ones, but this was a William Monk who at this time was on the lower rungs of a ladder that was to allow him to climb some of the heights in the administration of the town's affairs, his range extended to Parish Clerk, Court Bailiff, Borough Reeve, Town Sergeant and others. He was the factotum of Local Government in early Victorian Tavistock.

A man by the name of Daniel Corin had set himself up as Town Crier in opposition to Monk, so Tavistock had two Criers. Monk objected, and supported by the Duke of Bedford's Tavistock agent John Benson, Monk was appointed the official Town Crier along with manifold other positions, until his death in the 1870's.

There had been a series of Town Criers when the office of Town Crier lapsed in 1915, and was not revived for sixty-eight years. Then, in 1983, Dick Lloyd, landlord of the Tavistock Inn, took the initiative and, re-clothed in a £500 outfit provided by the Town Council, he embarked on a highly successful six-year reign which only ended with his retirement through ill-health in 1989. Ron Davies, an interior designer, took over the reigns into the 1990's, he sadly died in 1995. In 1997, Tavistock Lions organised a competition to fill the vacancy. The winner was Bob Rose and he was adopted by the Council to be the official Town Crier. Bob, a former soldier and prison officer who was actually born in Weston-Super-Mare, Somerset, but had adopted Tavistock as his home, retired from the position in 2009 after twelve years' service.

Another Tavistock Lions' competition in July 2010, held as part of the Carnival, was won by Mr David Turner who is the current holder of the position.